This Article was recently posted on DallasNews.com. Below are a few takeaways:

“Home prices continued to rise in the vast majority of markets, but with inventory steadily increasing, home prices are, on average, rising at a slower and healthier pace,”

“Housing affordability will be the key to sustained healthy growth in the housing market in the upcoming years.”…..Among Texas’ big cities, the largest price growth was in Austin, where median single-family home prices were 5.9 percent higher than fourth quarter 2017. Austin also had the highest prices with a median of $310,400 at the end of 2018.  D-FW’s median home price of $254,900 is still just a bit below the nationwide $257,600 price, according to the Realtors.” 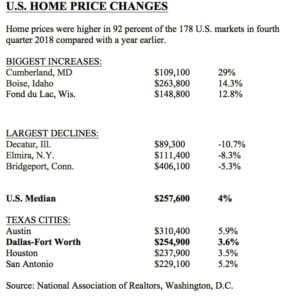